Production Sound Mixer Tully Chen: my experience using the Aaton-Digital CantarX3 and CantarMini for music recording and playback on location and on the film set

With thanks to Transfax Productions for the movie clips

Tully Chen, based in Israel, is a very experienced sound mixer for both movies and television production. “I bought a CantarX1 recorder earlier in my career, more than 11 years ago, after hearing good reports about its capabilities and quality” Tully says. “-and then I was one of the first to order the new Aaton CantarX3 when it was first announced, and now I have the Mini too.” The X3 and its smaller brother the CantarMini have quickly established themselves with many production sound mixers worldwide as the recorders of choice for location sound work.

“The capabilities and quality of the X3 and Mini now are so powerful and so comprehensive that I had begun thinking beyond normal movie sound recording about the possibilities of using my X3 and Mini for multitrack high end music production” says Tully.
“Then I was asked to join the production team of a new movie as production sound mixer, and it was to be a musical. This would be the perfect opportunity to see what my X3 and Mini could do.” “The film, from production company Transfax, is ‘Red Fields’, the Producer Marek Rosenbaum and director Keren Yedaya, who also wrote the screenplay. It is based on a 1986 rock opera ‘Mami’, which has since tghen developed a cult following. Shooting on the new movie is now finished and it is in post production for release in 2019.”

The fifteen songs featured in the film were recorded live during shooting, putting both Tully and the capabilities of the Cantars to the test.
“The challenge was to record the best musical and acting performances and the best cinematic shots to match the story telling, all under the very tough conditions we had of budget, time and extremely hot weather.”

“Before starting we made many tests and decided that although we would provide some playback to the singers earpieces we must have a control on location that will allow us to change some musical aspects of the recording, for example, to shorten or extend the length of an intro to have more precise timing, or to change the in-ear mix between instruments to help the singers, be it more rhythm section or more harmony. For that purpose we hired a highly skilled Pro Tools technician Shai Sivan, who was full time on set. He was fed by the microphones I set up on location, pre recorded playback tracks and an Ableton system, operated by the musical arranger Nir Maimon.”

“At one stage in the screenplay the character Mami decides to travel to the city to look for a better destiny for her and her wounded husband. She sets out to hitch-hike, and a huge trailer truck pulls over to pick them up. While driving the bumpy road dusk falls and Mami (Neta Elkayam) starts to sing a mellow love song to her husband.”

“This song was one of the most challenging recordings of the film. There was a debate as to whether the singer could perform musically in such a difficult and noisy environment as the truck cabin. After choosing a truck with a big enough cabin to set up a mini Alexa, lighting, and sound, we decided to record it live as a real driving scene.”

“Without the CantarMini I could not have managed to achieve such excellent and pleasing results. The Mini’s impressive pre amplifiers, high pass filters and distortion proof limiters, and its tiny size, the ability to send up to 8 feeds, and the connection to the Cantarem fader panel allowing an overall of 22 faders in such a small machine was for me like a dream.”

“With the Mini I could be so minimalistic but also so empowered in the tiny space I had in that truck cabin. I had to boom-operate this scene in order to be ‘on axis’ as the singer moved her head during the song. As we were recording live I could use the excellent play & rec option that the Cantars have allowing simultaneous playout and recording, unique for a field recorder.”

“I prepared several separate tracks for playback that included pre recorded singing, musical accompaniment, metronome clicks and live singing return back to the singers’ in-ear monitors.”
“Using the Cantarem 2 fader panel connected to the Mini I could control the desired mix to the actors’ in-ear monitors, control the metronome level, the instruments level and so on. The control van (Video Village) was fed wirelessly with one mix plus metronome, and the director with another mix minus metronome.”

“The Cantar’s Play & Rec mode allows you to record a scene as you would normally and start the cued playback at the precise moment. Timing is so important. Here, for example, I had to wait until the city lights started to disappear in the background, as the director insisted we create a time passage between the previous shot and this one. Between takes we could listen to the recorded take and mix the recorded tracks with the pre recorded playback, again using this unique location recorder function of the CantarX recorders.”

“Another absorbing musical scene is the ‘rape scene’. Mami arrives in the big city and finds a job in a local restaurant. At night the kitchen is a sleeping shelter for illegal Palestinian workers. At a certain moment one of the workers starts to play the OUD, (Marwan Merib) and gradually others join him singing. Then Taufik starts the ‘rape song,’ a very brutal and charged piece in which the rape is expressed only verbally. He addresses Mami as a symbol of occupation and depression, but Mami replies that she herself, an immigrant's daughter, is also a victim of zionism.”

“The technical challenge was to record the mix of a dialogue scene of 7 actors which transitions into a musical scene with 2 soloists, a male choir and OUD playing. I have used a Neumann KM 140 as a hidden mic for the OUD, Neumann KM 150 as main boom, Schoeps ORTF CCM4 as stereo pair, all singers / actors and the OUD player with personal miniature DPA Slim 4060 miniature microphones.” “The CantarX3 with its superb pre amps, limiters and high pass filters allowed me to address and master this complex scenario. The Cantarem2 fader panel added more control over inputs and tracks.”
“The passage from dialogue to singing voices, even with such high dynamic range, was smooth, rich and detailed.”
“The music supervisors on set were extremely happy with sound we achieved generally and on the OUD track in particular.”
“I can now foresee a great additional future for music recording using these Cantars with their huge built in control, flexibility, and quality.”

Picture#2 A recording challenge: on location, vocalists and musicians in the outdoor environment.Neta Elkayam and Dudu Tasa perform the opening song ‘Small town in the South’.

Picture#3 During the recordings in the desert town a curious local boy shows interest.

Picture#4 Preparations inside the truck cabin for the live recording. 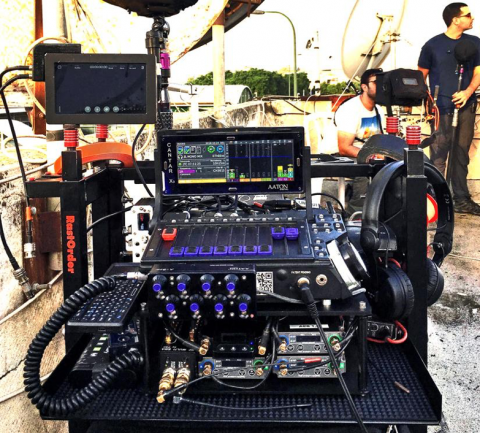 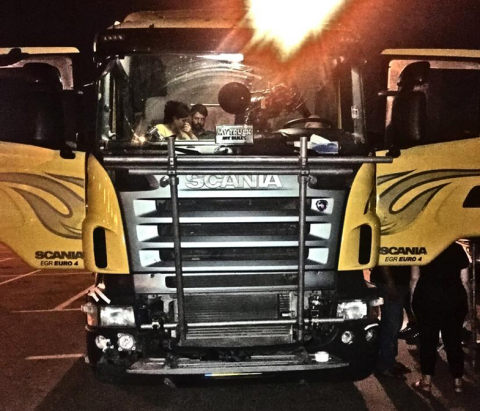 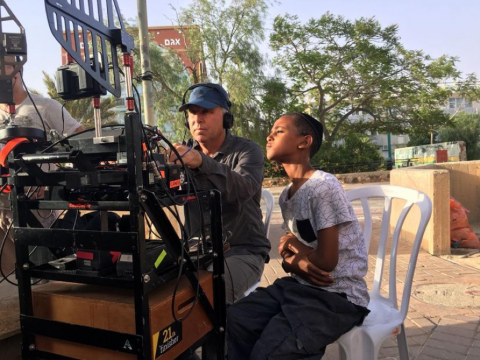 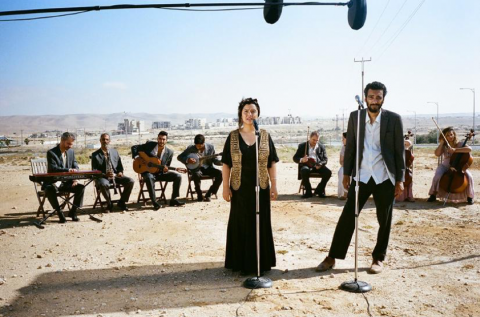 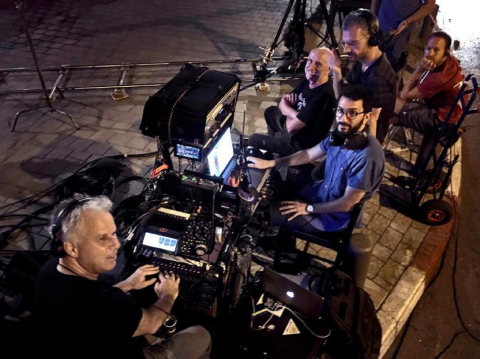